Dallas, Texas Location Sound Mixer with over 25 years experience mixing every kind of location sound, all over the world. Complete equipment packages configured to the needs of your production. 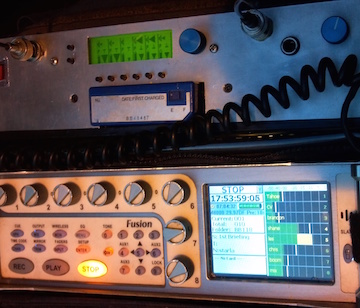 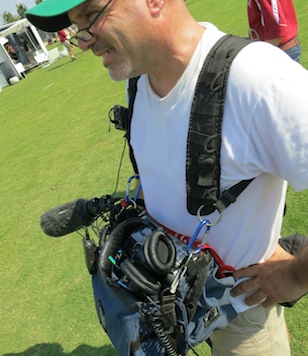 Just So You Know

As you shop for sound mixers, you'll notice there are a few who want to send out a sound package to your shoot run by "one of our guys." Translation: They're already booked on your days, but they want your rental $ for their other sound package(s). They send you a sound "friend" with less experience, or a post guy, or a trainee, none of whom own gear, to gain experience on your shoot. Or how about this: They'll book themselves with you now and switch out to some "he's a great guy" as your shoot date approaches, because they booked a better gig for themselves.

With Pete, you get the actual guy you hired with gear that I own, with thousands of days' experience shooting all kinds of television. Just so you know.

DSLRs,Reds, aand flavor-of-the-day recorder/monitors continue to show up on set, and they've shown up in quantity, sometimes with 4 or 5 devices on the job. I typically send high quality wireless audio reference tracks to several of them at once, often with different mixes going to each. My wireless receivers are compact, lightweight, and can ride on the hot shoe of the camera. However, regardless of the robust audio I can deliver directly to the DLSR, Double System Sound is a must for DSLR audio work.

As most production companies have discovered (thru bad experiences), it is essential that DSLR and virtually every other camera format be shot double system sound. That is, the sound should be recorded to a separate, high quality audio recorder, and never to the camera (or device) only. Here's just a few reasons why:

1. The mini audio input jack on these cameras are prone to developing problems. Dirt ingress and torquing from the mini plug can cause it to fault without warning. The input jack is held in place only by solder junctions on the circuit board. Just a few spots of tin and lead! The audio inputs on DSLRs only accept mic level audio, at a very specific level for optimum signal-to-noise ratio. If the inputs are not set exactly right, the resulting audio will be to low-level and noisy, or too hot. Red's on-board audio quality is compeltey unpredictable, and many bizarre audio artifacts will be heard in the headphone output along with the desired audio signal.

2.Unlike professional video cameras, the sound man cannot check the DSLR for audio confidence during a shot. Only before, or after. If you are missing audio, you'll only know after the action's over!

3.Especially in documentary situations, camera operators are prone to inadvertently pulling the mini-plugs off the DSLR in mid-shot. There's no "click" or screw connection to keep them in.

4. DLSR "pro" audio interfaces were rushed into production and are generally poorly designed. Remember the "Juiced-Link?" By now, the silkscreen switch labels have worn off, leaving you wondering which switch does what. The metering, 3 or 4 LEDs, is difficult to set correctly. The knobs on these devices are prone to being unknowingly nudged by the camera operator, screwing up the settings mid-shot.

Using a separate recorder such as my Deva Fusion 10-track allows you to isolate all those talent wireless on to their own separate tracks, with superior audio quality. It also allows the use of time code and metadata to identify takes, and create sound reports. The wireless audio links I use add extra power to auto-sync software such as PluralEyes. With this software, audio can be automatically sync'd-up with the picture files. However, a reasonably robust audio track must be sent directly to the DLSR that matches the production audio. The DSLR internal camera mic can serve this purpose, but only if it is in "earshot" of the action you're recording.

Production can be the most utterly tedious process imaginable. The hours can be pretty extreme. Within a 12 hour day, one may actually “work” less than half the time, the rest of the time spent waiting to work. Other days are techno-slams. So, as mastery in one's craft is acheived, a crewperson's mind often switches away from the actual craft. More interesting are the social dynamics of a traveling band of heroes and misfits. Of course, these days, crews spend less time being social and more time tapping smartphones. It is often a fireman’s job, going from boring, rudimentary tasks, to suddenly faced with baffling problems involving things like sweaty people, jewelry, paper bags, radio propagation, flaming egos, dirt, animal shit or microelectronics. All while the “grownups” breathe down your neck as you solve them, asking repeatedly for ETA's. Set-life can be very much like junior high school- rampant insecurity, arrogance, hierarchal selection, misplaced wealth or privilege, ego, mind games. #setlife is a major dedication to Looking Good, Being Right, and Staying In Control. The entertainment industry divorce rate is among the highest of any profession. Many voluntarily leave the film business. Stay too long, and the film business leaves you. What did Hunter S Thompson say about the TV business? If you don't know, its worth a google.

The above being said, as a Texas-based mixer without anywhere near the credentials of those Hollywood sound giants, I do love the job. I embrace the insanity, every day is like visiting a circus/asylum, and I get to go home to my family at the end of most days. But don't let those facebook hashtags fool ya!